OK enough is enough. There’s a thread about IMPOSING AGILE PRACTICES on Twitter that’s grown a lot. Ron Jeffries, Liz Keogh, Eric Willeke and several dozen others are speaking their minds about the issue of when it’s OK (or not) to impose Agile practices on teams regardless of what they think about it.  There is a lot of confusion about the topic.

My position is clear: with very few exceptions, inviting is superior in every conceivable way to imposition for the vast majority of use cases that fall under the bell curve of typical situations.

Yes, there are a few edge cases, such as when the company will fail in 6 months if something is not done. Or when all of the best talent has already vacated for obvious reasons. Those are outliers, edge cases. Maybe 10 or 15% of the total set of all use cases for so-called “Agile transformation.” As I have said before, a stopped clock is right 2 minutes a day.  That’s a tiny minority of the 1440 minutes availoable, and it doesn’t mean the clock ever actually worked. Yes, I too can cite edge-case examples of when the brushing of teeth is not advised. Does that imply that the brushing of teeth in the main does not work, or is not advised? Does it mean that not brushing teeth is as good a practice as brushing teeth daily? No, and no.

So there you have it: my position, on the matter of The Agile Imposition. My Tweets pretty much sum up how I feel and you can see those here: (link)

To be clear, I have done my very best to instigate a conversation about this. And now we have one. It’s curious to watch what’s happening. Several of the participants chide me for various sins: self-selecting data, engaging in hyperbole, yelling, or being full of sh**. But these same participants remain mysteriously drawn to and remain in the conversation. You can see it all here. Scroll it to view:  (link)

I am grateful to each and every one that is participating. Some have asked me what I want, asking me to suggest a next step. Others are curious what the call to action actually is. Well, here it is. But first the definitions:

Now you know my position on this, so there’s nothing further for me to say. But lots of others seem to be OK with imposing Agile practices; that is, forcing those practices regardless of any lack of willingness on the part of those affected. From my point of view, you DO need to ask what the level of willingness is, without any threat of sanctions for the “wrong answer,” if you are to have any idea of what that level of willingness actually is. I have found that inviting everyone in one big room, after opening a little space for people to actually  speak their mind,  is usually the best way to ask people and find out.

Others disagree, as usual.

Here are some of the comments: 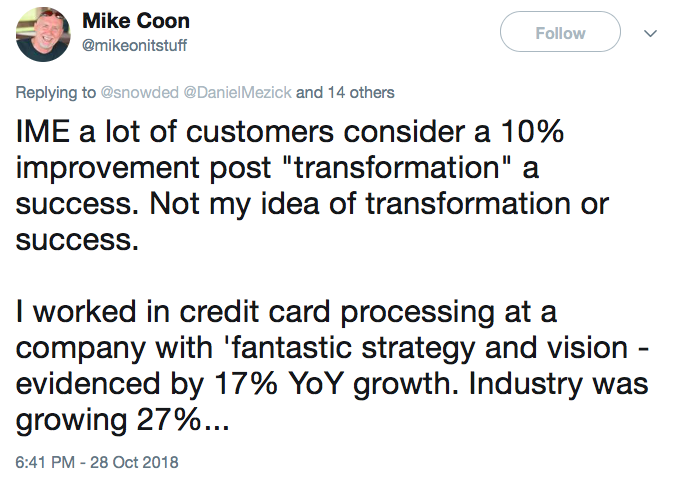 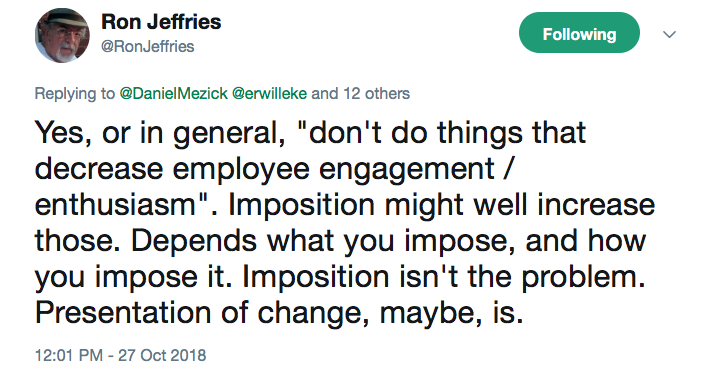 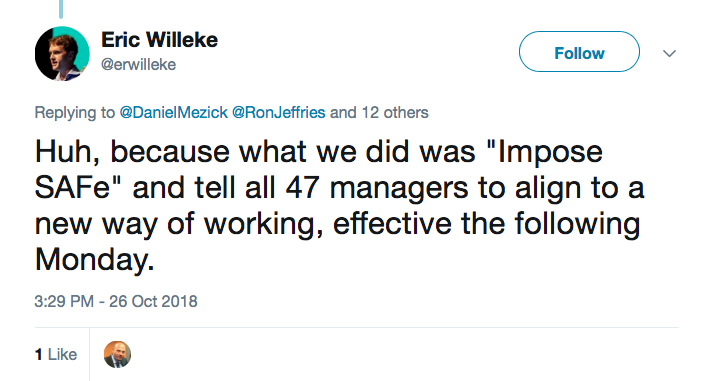 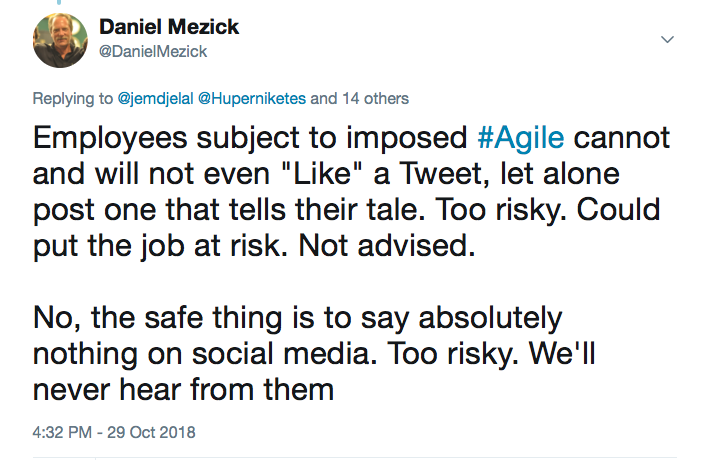 Now folks are asking for what’s next here. Asking what the call to action is. What the next step is. Asking where we are going with this. For example: 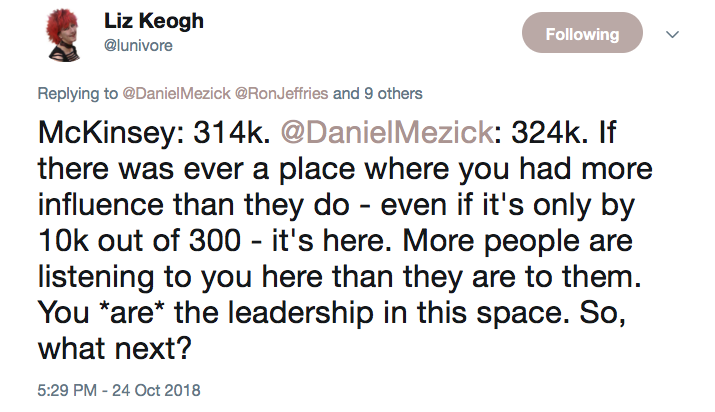 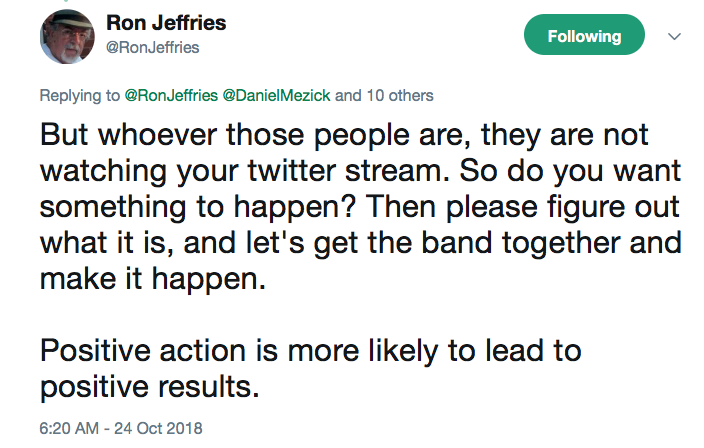 THE CALL TO ACTION

OK; here it is: Speak Your Mind. Document a statement of position, for or against. Be counted.

If you care whatsoever about this topic, here is your chance. This is your invitation to say something about where YOU stand in this issue of pushing Agile practices on teams without respect to what they want, what they think or what they feel about THAT.

You are invited to JUST TAKE A PUBLIC POSITION.

For, or against, imposing.

For, or against,  INVITING.

2. Try to keep it to less than 800 words if you can; people have short attention spans these days.

When you do that, you’ll be telling the world exactly where you stand on this. Or not, depending on how you tell the tale.

The basic guidelines are the 1-2-3 listed above. Any medium. Less than 800 words of you can. Post to Twitter with the #InviteOrImpose hashtag.

Well. What a difference a day or two makes.

Over the summer of 2018, the following actually happened:

Ron Jeffries (Manifesto signatory) issued a protective warnings and protests about the forcing of Agile practices, and  The Agile Industrial Complex, in his public writing.

Martin Fowler called the Agile Industrial Complex “our first problem” and in that same essay he said “our challenge now is dealing with faux (fake) Agile.”

And then he said:

For the record, the word [travesty] is defined as “a false, absurd, or distorted representation of something” (as a noun) and “to represent in a false or distorted way.” (as a verb.)

You’d expect the rest of the “agile thought leaders” to weigh with an opinion on this big, huge issue, right?

Especially the loudest voices that are constantly seeking the spotlight.

But no. Not this time.

The crickets are chirping. 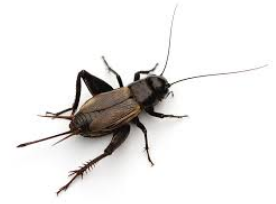 Can you see why?

Anyone party to “push” or anyone with friend$ in the “push” business are in a double-bind. If they come out for Push, they look idiotic in light of the Manifesto.

And if they say anything nice about opt-in participation, if they come down on the side of invitation, they risk alienating their friend$ in the industry who routinely provide lots of big-org consulting opportunities and deal flow.

So there it is.

The best strategy if you are for Push is…. to keep quiet.

And hope it all goes away.

In addition to Ron Jeffries and Martin Fowler, dozens of extremely experienced and very credible and very concerned Agile folks, people like Mark Levison…Jon Jorgensen…Mike Burrows. They just came out and said it.

They said it in print.

They said it from the conference keynote podium. And on social media:

You can get an idea of what I am talking about by examining the REAL AGILE LEADERS HALL OF FAME link, at the end of this essay. That link contains the full story, and all the names.

And what’s notable is who is NOT on that list. All the big, loud, prominent voices are…missing in action. Nothing to say. No opinion whatsoever on the most pressing issue of our time.

Imagine THAT. This is the new version of “agile thought leadership.”

Most all of the improvement from Agile comes from self-managed, self-organizing teams

In this new default reality, in this fake-Agile  ‘reality distortion field’ , executives are told directly and indirectly that decision-making does not have to change to get a legitimate and lasting “Agile transformation.” That everything can stay the same. That employee engagement is not totally “not necessary.”

And it’s all very comforting.

So…WRONG. On so many levels.

And a huge disservice to the executives who are supposedly being served an “Agile Transformation.”

In this strange new world of Agile, the “thought leaders,” the large consulting firms and the Agile institutions have exactly ZERO to say about the tolerance of imposition of practices on teams, even as the members of these teams are being fundamentally disrespected. The teams go to the web. They read about the Manifesto principles, and the “respect for people” pillar of Lean. And they know what’s going at their organization is…total bullshit.

In this strange new world of “Agile,” freedom is slavery.

Agile leaders routinely extol the virtue and value of “self organizing teams” and “motivated individuals.” As well they should, since these exact phrases appear in The Agile Manifesto.

The primary impediment to both of these wonderful ideas is the imposition of Agile practices on teams without their consent.

Without their voluntary engagement.

Without actually manifesting “respect for people,” you know, that “very small aspect” of Lean.

Self-organizing teams are self-managing teams. Specifically, these teams manage decision-making, at the team level, on their own. Self-organizing teams know how they make decisions. The process of deciding is usually all very explicit and well understood by all team members. Teams at this maturity level often have explicit rules they use when making a decision that affect the whole team.

It’s very easy to see how the imposition or “push” of Agile practices on teams without their consent can make the “self-organizing teams” ideal just about impossible to achieve. It’s self-evident: external authority is calling all the shots with the “do these Agile practices until further notice” decision. There are no decisions for the team to “self manage,” let alone “self organize.”

Pushing a solution (“do these Agile practices until further notice”) on a solution provider is a fundamentally dumb idea. Developers tend to be intelligent, creative, independent-minded, and introverted. Developers identify as “solution builders” and “solution providers.” With the imposition of Agile practices on teams we can expect some real disengagement and resentment from the most independent-minded developers.

We could threaten the developer’s job in response. Question: is that “motivating?” Are people who are afraid of losing their jobs the “motivated individuals” the Manifesto is referring to? Very doubtful indeed!

Agile leaders routinely say all the right things about motivated individuals and self-organizing teams. Then they say and do absolutely nothing in protest of the Agile-industry’s standard of pushing Agile practices on teams. This is all very misleading!

Agile leaders cannot have it both ways. They cannot claim solidarity with Agile principles and also say absolutely nothing in protest about the deplorable pandemic of “imposed Agility.”

To remain credible, these Agile leaders need to be sounding the alarm about the harmful push of practices on teams. These leaders need to be issuing protective warning and protests about imposing practices on teams. It’s harmful, it makes “self organizing teams” next-to-impossible to achieve, and it makes “motivated individuals” much less plentiful, or even nonexistent.

Moral of story: Agile leaders who sing the praises and extol the virtue of  “self organizing teams” and “motivated individuals” while remaining silent on the #1 impediment to manifesting both is a kind of deception.

If you are an Agile leader, and you engage in this pattern of rhetoric, it strongly implies you are for something that you are really not.

If Agile leaders actually want “self organizing teams” and  “motivated individuals” to manifest worldwide, we will hear them loudly sounding the alarm about the deplorable status-quo of forcing Agile practices on teams without their consent.

As of today, protective warnings and protests on this topic from Agile leaders are very hard to locate. Hard to come by. Nearly nonexistent.

To learn more about the worldwide scope of this insidious problem, please examine the essay “THE AGILE INDUSTRIAL COMPLEX.”